Everyone understands the allure of retirement communities that advertise exciting resident events. Having a thriving social life as you make the transition into a retirement community is extremely important. Fear of giving up freedom is what discourages many people from choosing to downsize.

At Ardenwoods we not only offer events planned with our residents in mind, we also offer resident planned events! This Valentine’s Day we helped a couple of residents coordinate to throw “Sweets to the Sweet in Verse and Dessert,” a resident-lead community event.…  END_OF_DOCUMENT_TOKEN_TO_BE_REPLACED

”Fill your life with adventures, not things. Have stories to tell, not stuff to show.”

This is the perfect quote to use when talking about Paul Bryant. That’s what his life has been…one adventure after another with books of stories, to boot! 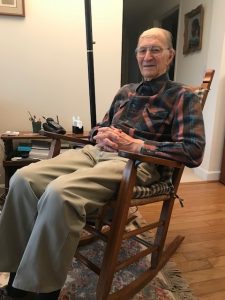 Paul’s story began in Oklahoma City, where he was born in 1928 and raised until 1945 when he entered what was then Oklahoma A & M as an agriculture student. But after a year, Paul joined the army at the age of 17 (he graduated high school at the age of 16!). World War II had just ended the year prior, and the military was looking for soldiers who could play an instrument in order to establish military bands. As luck would have it, Paul was a trumpet player and was snatched up to enter the Army’s music school at Camp Lee, Virginia, where he first had to complete basic training. …  END_OF_DOCUMENT_TOKEN_TO_BE_REPLACED

Ardenwoods and Heather Glen are closely monitoring and preparing for the COVID-19 situation. The safety and well-being of our residents, staff, and their families is our top priority.Click here for more information